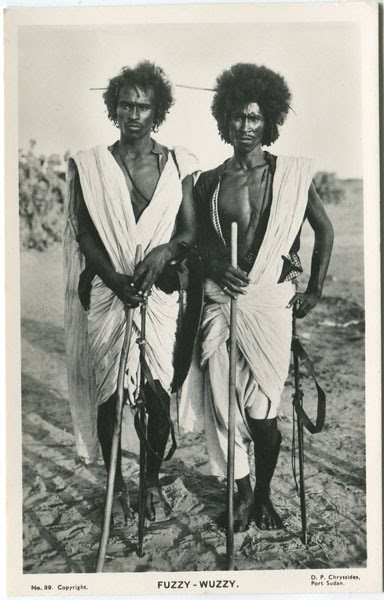 In a recent comment CK [clicky] asked for any recommendations I  might have for books covering the campaigns in the "Sudan" (errr... Victorian, not ISIS, just so we're clear..

).. think Kitchener, Hicks, the Mahdi and of course Gordon...

When I first started my Sudan project I had visions of dusty columns of British and Commonwealth troops, dressed in khaki, marching through the desert towards Omdurman, supported by camels and gunboats... the more reading I did though, and the less that appealed and I realised that wargaming the "Sudan" required decisions about what period we were specifically interested in as, beginning to end, the wars lasted 20 odd years and a lot changed in that time.. basically I divide it into five... (probably four and a sub-part if you're anal about that kind of thing) and my book collection is geared somewhat to the period choice I subsequently made...

So my attention shifted to the earlier period(s)..

...so here are the books in my library... I've numbered them by the periods as listed above... 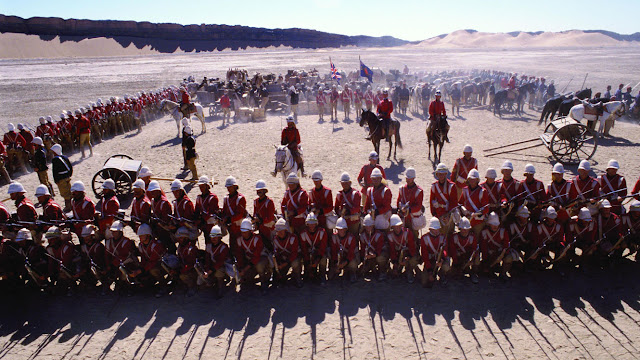 Posted by Steve-the-Wargamer at 1:08 pm 8 comments:

Almost forgot to post this..  I can only blame weight of work and a lack of time in general...

Either way, amongst a veritable flurry of Napoleonic naval fiction this year, I did get time to read this..

Difficult to believe that this is already the third in the series but here you go..  been looking forward to this as I quite enjoyed the second volume [clicky] (after a slow start I thought the series had hit its pace with the start of the actual War of the Roses, as opposed to the precursory actions).

Either way, with the death of Richard (duke of York) killed at the end of the previous book at the Battle of Wakefield, the book opens with his head (and Salisbury's) being mounted on spikes at the entrance to the city of York; unfortunately for Margaret (of Anjou - Henry VI's wife) the action backfires as this now unleashes his sons.....

King Henry (VI) is still held prisoner and Margaret marches south with an army comprised of partly Scottish troops to free him. She defeats Warwick (the "Kingmaker", and Henry's jailer) at the 2nd Battle of St Albans (with  nifty flank move around his fortified frontal position) and after the battle they find Henry "who was found unharmed, sitting quietly beneath a tree".

Elsewhere, however, Edward (the eldest York son) has combined his army with a Welsh army under Jasper Tudor and wins convincingly at the Battle of Mortimer's Cross.

Advancing on London, Margaret is denied access to the city (the histories says because if a fear by the Londoner's of the Scots in her army!), and short of supplies is forced to retreat north leaving the way open for Edward and his army to enter the city to open arms...

Edward says 'enough is enough' and pronounces himself king (he became Edward IV), is supported by the city and parliament. The army then marches north and meets with Margaret's army at Towton where Edward has a huge victory (this is still the bloodiest battle on British soil). Margaret and the young rice of Wales escape to Scotland and then exile in France.Henry (the poor man..) is captured again and imprisoned in the Tower. Edward returns to London to his coronation.

After putting down some final rebellions it was time for Edward to consolidate power - all Lancastrian opposition has ceased - he marries Elizabeth Woodville and she starts giving him children (daughters) but she also starts to undermine the authority of the Neville family (of Warwick) seeking to put members of her family into as many positions of power as she can,

When Warwick finally snaps, and can take no more, he arrests and imprisons Edward (hence the nickname - at the time Warwick was both Henry and Edward's jailer)..  Surprised by the depth of feelings against him, and with uprisings all over the country in support of Edward, Warwick frees Edward in return for a pardon, but you know it won't end well..  and it doesn't...  how can it with the "Woodville woman" working behind the scenes..

I reckon I must be about two thirds of the way through one of the two re-basing projects I set myself for this year ... in this case the smaller of the two, the Sudan project.

The project has a two fold aim...   firstly to standardise the basing method; when I started the project I used plastic card and a sand flock material, two thirds through the project I decided I didn't like that and started using MDF bases, with sharp sand for the flocking material. The older bases, being a thinner plastic card, are also warping slightly..  not nice...


With apologies for the poor quality of the picture the following shows the new basing methodology and practice directly compared with the old...

A constructive couple of hours this morning got the following done... command figures are now on metal disks (tuppence's actually, but don't tell Her Maj I am defacing the royal visage 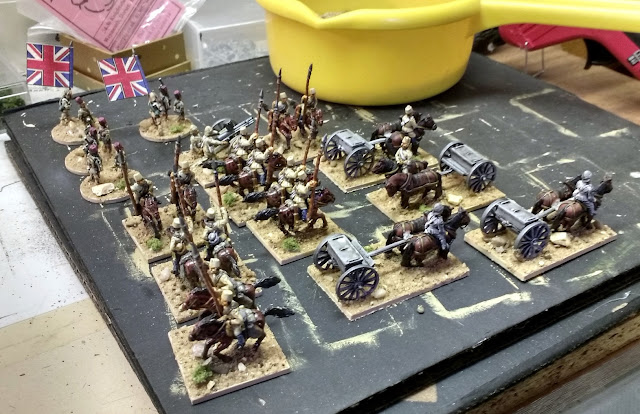 Lessons learned...  MDF bases are great, but a pain to prep - I think Big Lee [clicky]mentioned how the sides of the bases "bleed" through acrylics, so I now spray paint the bases with a polyurethane primer, and then paint in acrylic - saves time...  for the AWI re-basing project (which is much bigger) I've invested in a can of spray primer in the right green - saves even more time...

First in an occasional series, and just to show I'm not entirely idle at the moment....

I have always wanted an Arab Dhow to sail majestically upon the river sections of my Sudan wargames table, but being also an impecunious* type, I have baulked somewhat at paying the prices for some of the ready made articles. Being also of a generation that was bought up to make what wasn't available in our fledgling hobby, I decided to have a go myself and scratch build one....

What swung the decision though was the gift of some preserved dates over Christmas, as having disposed of the dates, I was left with one of those ever so evocative trays  that are purpose made for the job in hand...

A bit of judicious carving so as to "sharpen" one end left me with the following....  figures in the background are 15mm for scale... 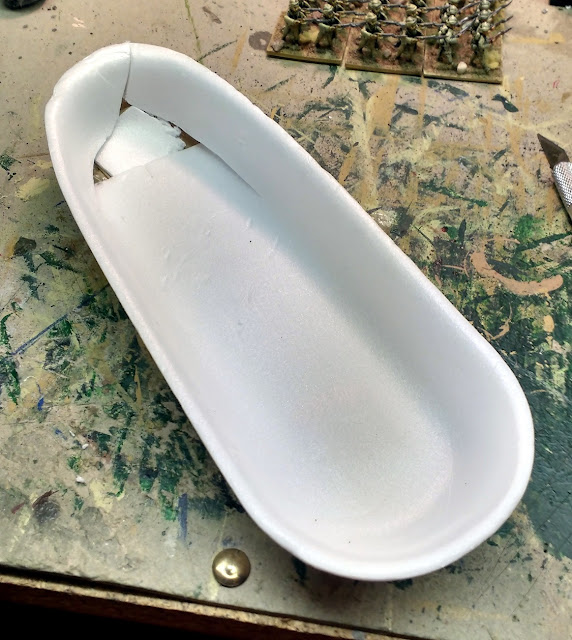 ...and as my intent was to cast the hull in Plaster of Paris (how old school is that?!) I sealed the outside of the cuts with packing tape..

...and filled the cuts/voids inside the hull with blue tack (for real old school it should have been plasticine! 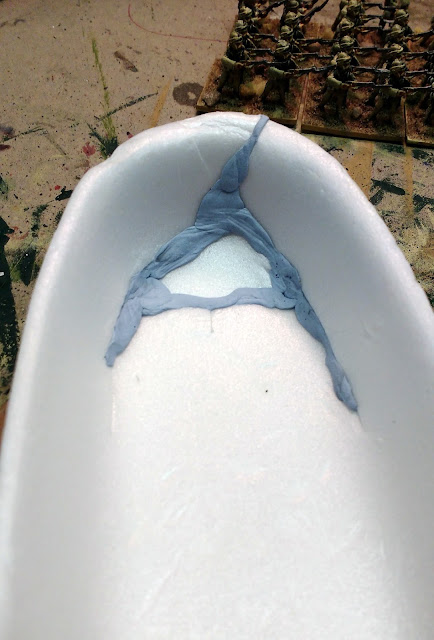 ...once it was smoothed out, I lightly scored the mould to represent hull planking, mixed up a batch of plaster and filled the mould.. and then you leave it to dry for some time (I left mine on a radiator for three days) 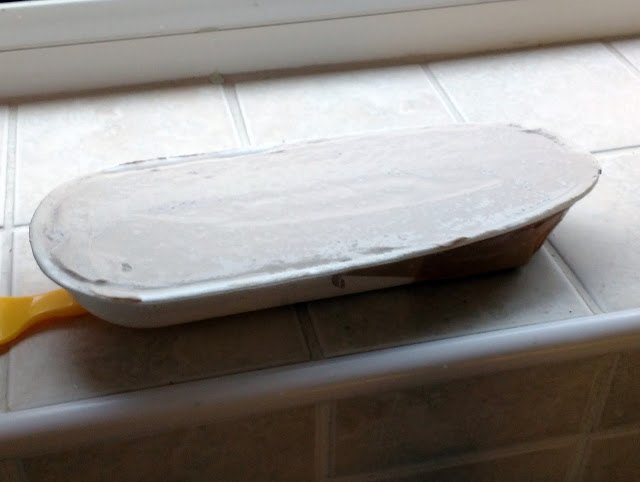 After taking it out of the mould, I smoothed off the edges slightly, and gave it a good spray of a polyurethane based paint to seal the plaster and give a painting surface suitable for acrylics...I also cut a stern bulkhead from thin plastic card and hot glued it to hull....

Last items to date are to score the "deck" to represent planking when it's dry brushed, and I've also set the mast (a barbecue bamboo skewer) in place and glued it...  this is where we are at the moment..  as before, figures are 15mm for scale... 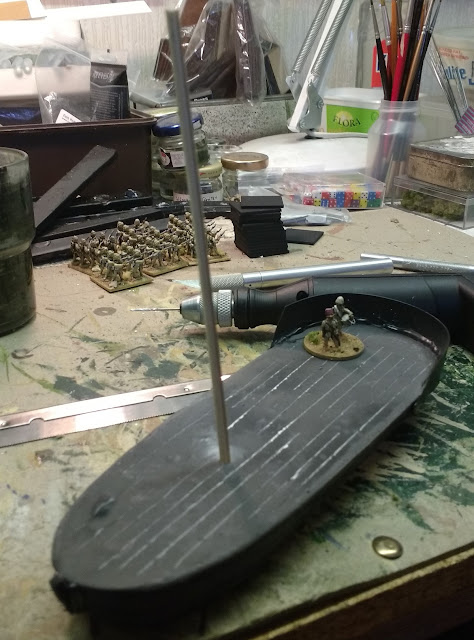 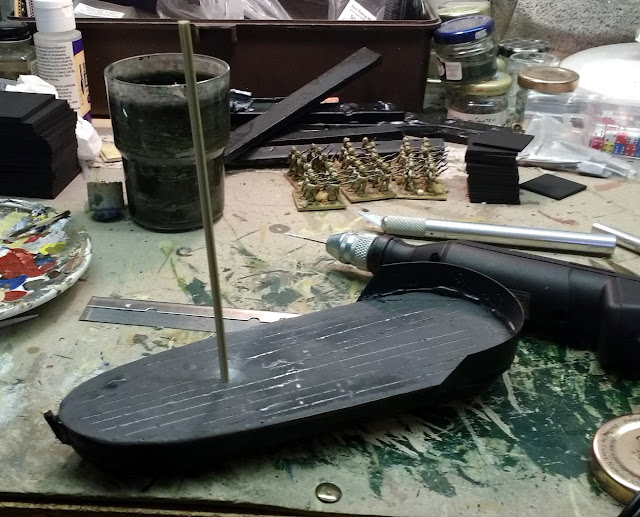 To come in post #2 - the lateen sail - two barbecue skewers glued together with some PVA glued thread wrapped around the skewers for verisimilitude.. the "sail" will be printed paper.. once it's all together I'll then dress the hull with additional bits and pieces to represent cargo, hold covers, etc. and finally dry brush and paint... 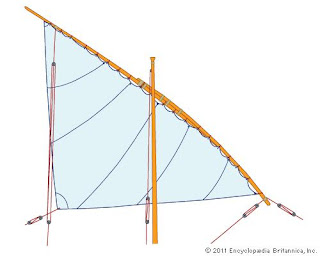 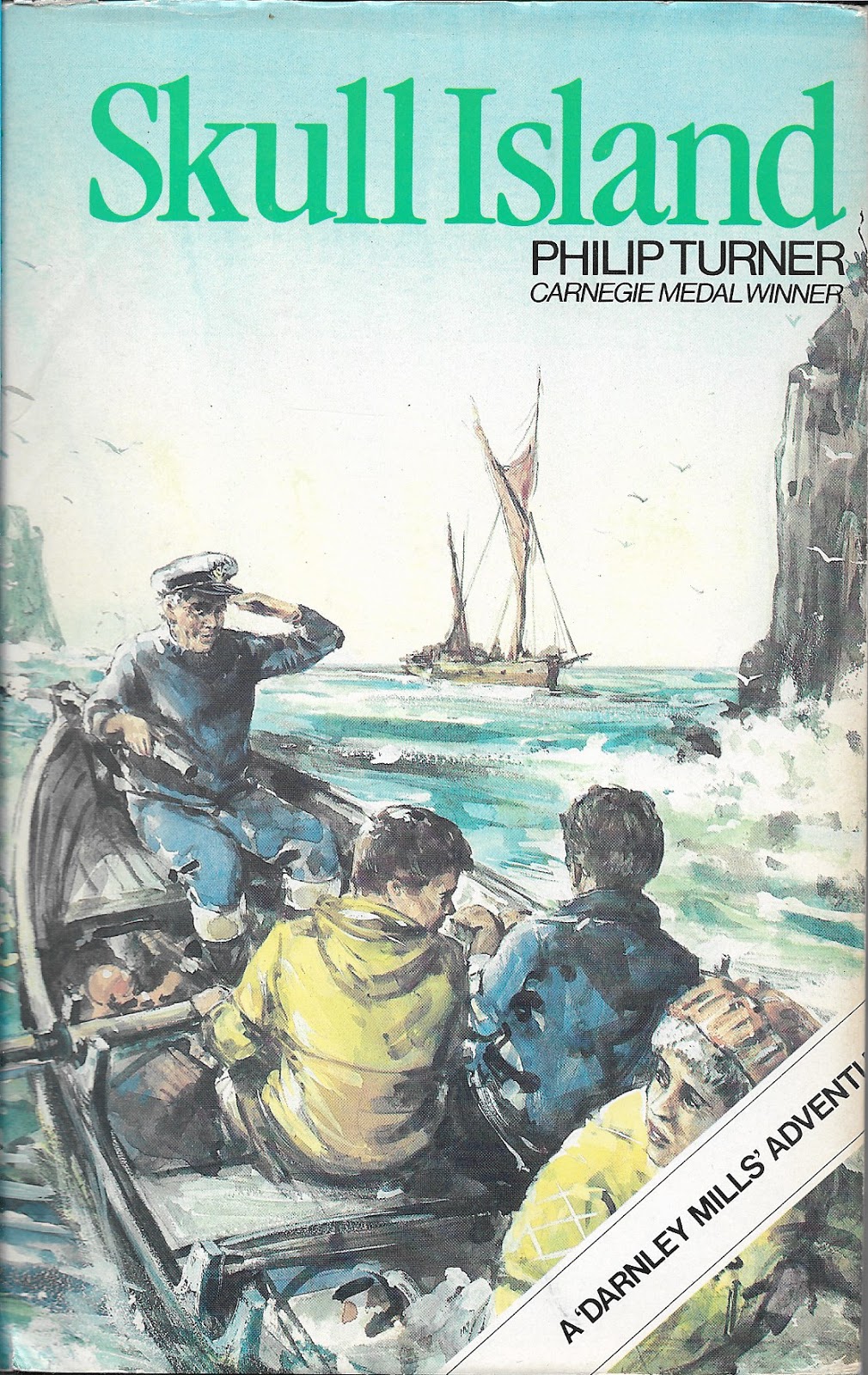 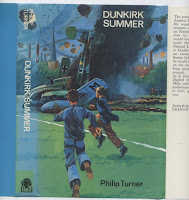