First, DG and I sat down and drew up the cards for random British arrival..  it turned out that arrivals would appear predominately in turns 4-6,  with only one arrival in each of turns 2 and 3.

Next we then threw for sides (high dice chose) - DG won this and went for the British ("I fancy attacking", he said.. gulp!)

We then diced for who would be first moving player - DG also won this as I remember, but in quite possibly the most expensive mistake of the game I neglected to take my opportunity to inflict damage on the bridge in the firing phase of this turn!

The initial moves were dominated by the cavalry clash between the on table American and British cavalry (acting as vedettes and advance party respectively) - there were a couple of inconclusive clashes before I finally managed to drive them off...  first blood to me...

The following is about move 4 - American troops debouch from the bridge in a desperate attempt to deploy before the British hordes (some of which you can see in the distance) arrive...  the American Dragoons control the road following those initial clashes.. 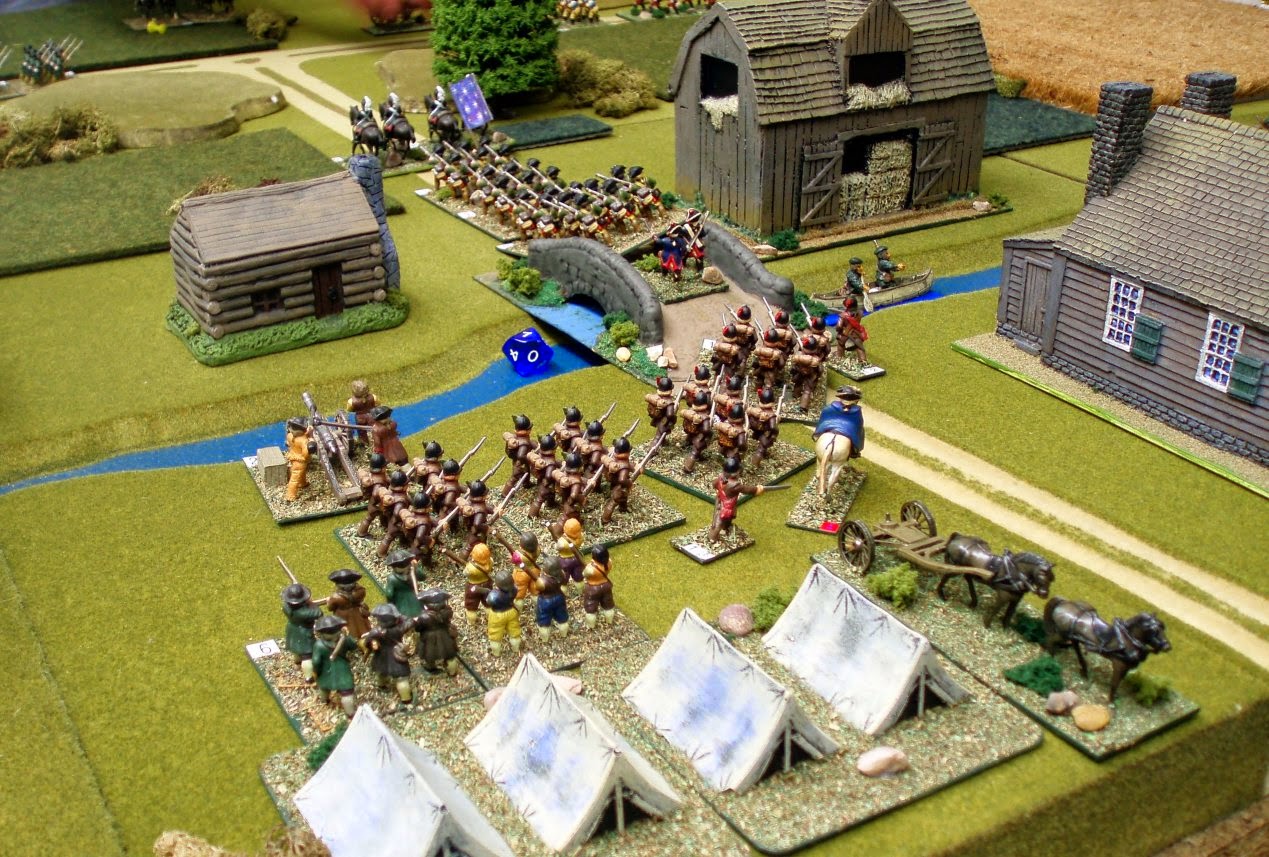 Next - a little later, perhaps just one move, and a view of the arriving British units, the discombobulated British dragoons are at top  (yellow pin - "shaken"); on the bridge the engineers are hard at work - only 7 of the 10 strength points left.....   damned tourists on the river enjoy the view 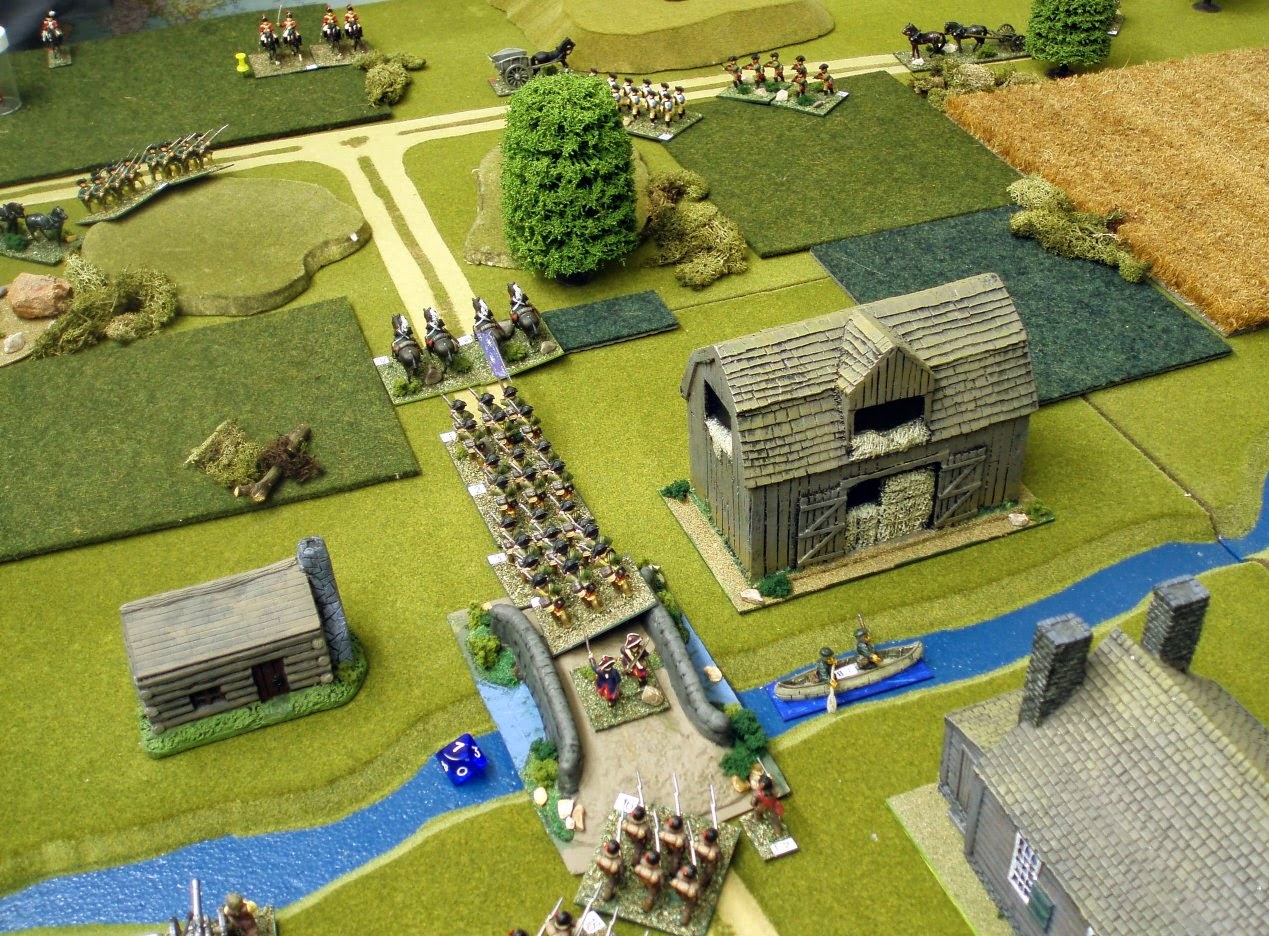 Bloody hundreds of them! 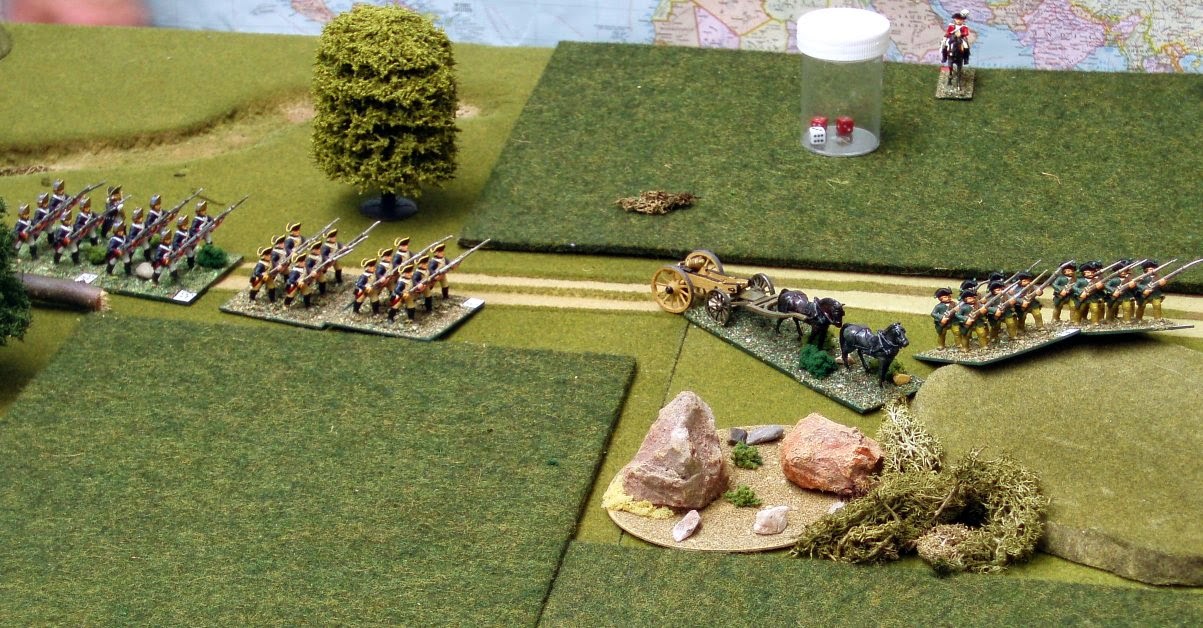 In the following, which is about move 7'ish, the Green Mountain Boys (by the bridge, backs to us) are being roughly handled by increasing numbers of damned German lick-spittle mercenaries (amazing how you get in to the mind set..

) but are giving as good as the get (shaken pins feature heavily). Off shot the American cavalry, which has been driven off, is desperately trying to recover.  DG's artillery is struggling for targets as one of the advantages (for me) of his large numbers is that they keep blocking his line of sight! Only 4 strength points left, and the pressure is immense..  great fun! 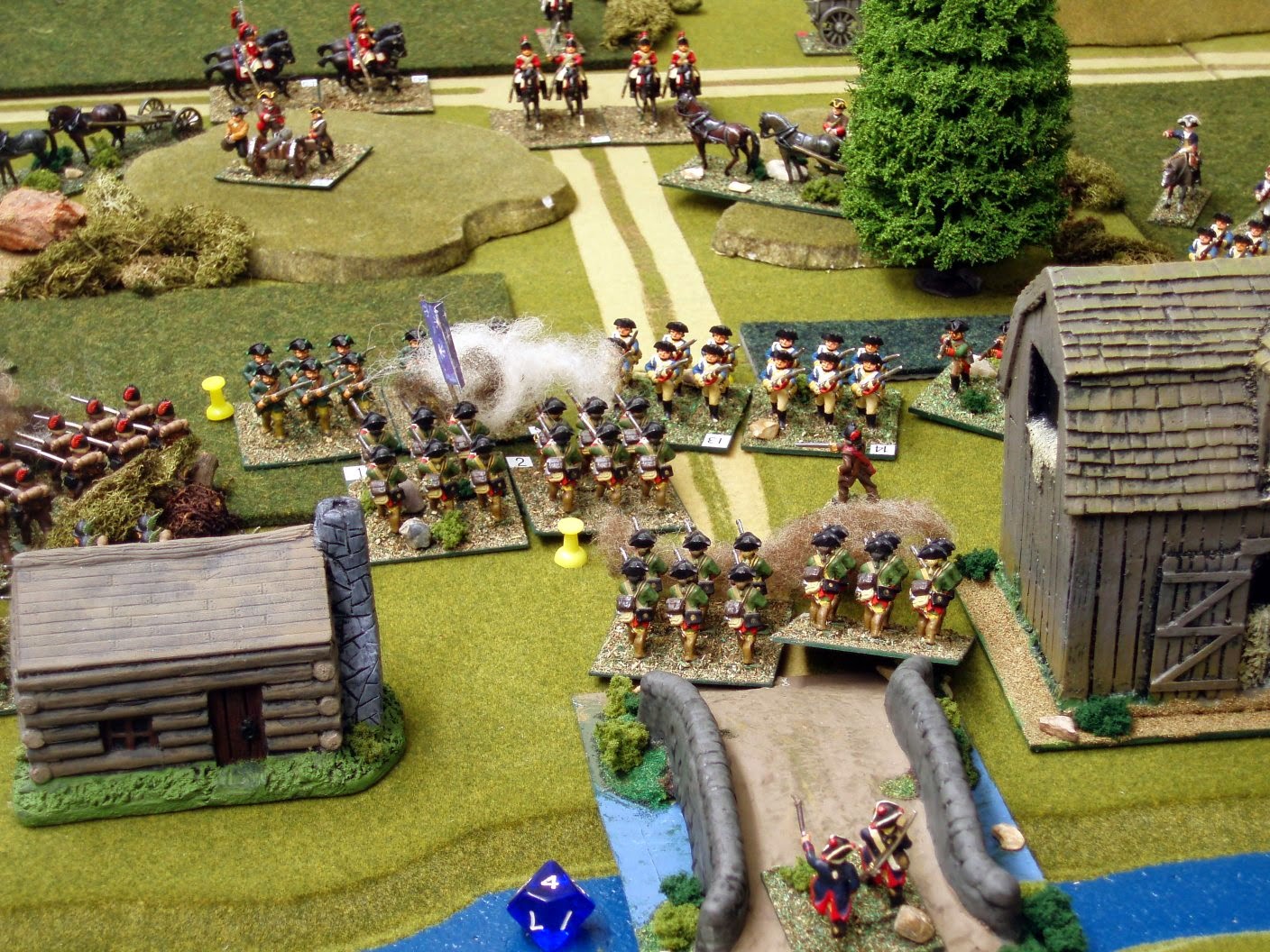 Same move, American left flank.. we have a unit if Hessians routing(top left - red pin), but always more Germans turn up to replace them - the volleys crash out, units are shaken, and dirty brown powder smoke drifts across the battlefield (authentic Welsh sheep wool rescued from barbed wire fences that DG bought with him once - looks very good I think.. )... 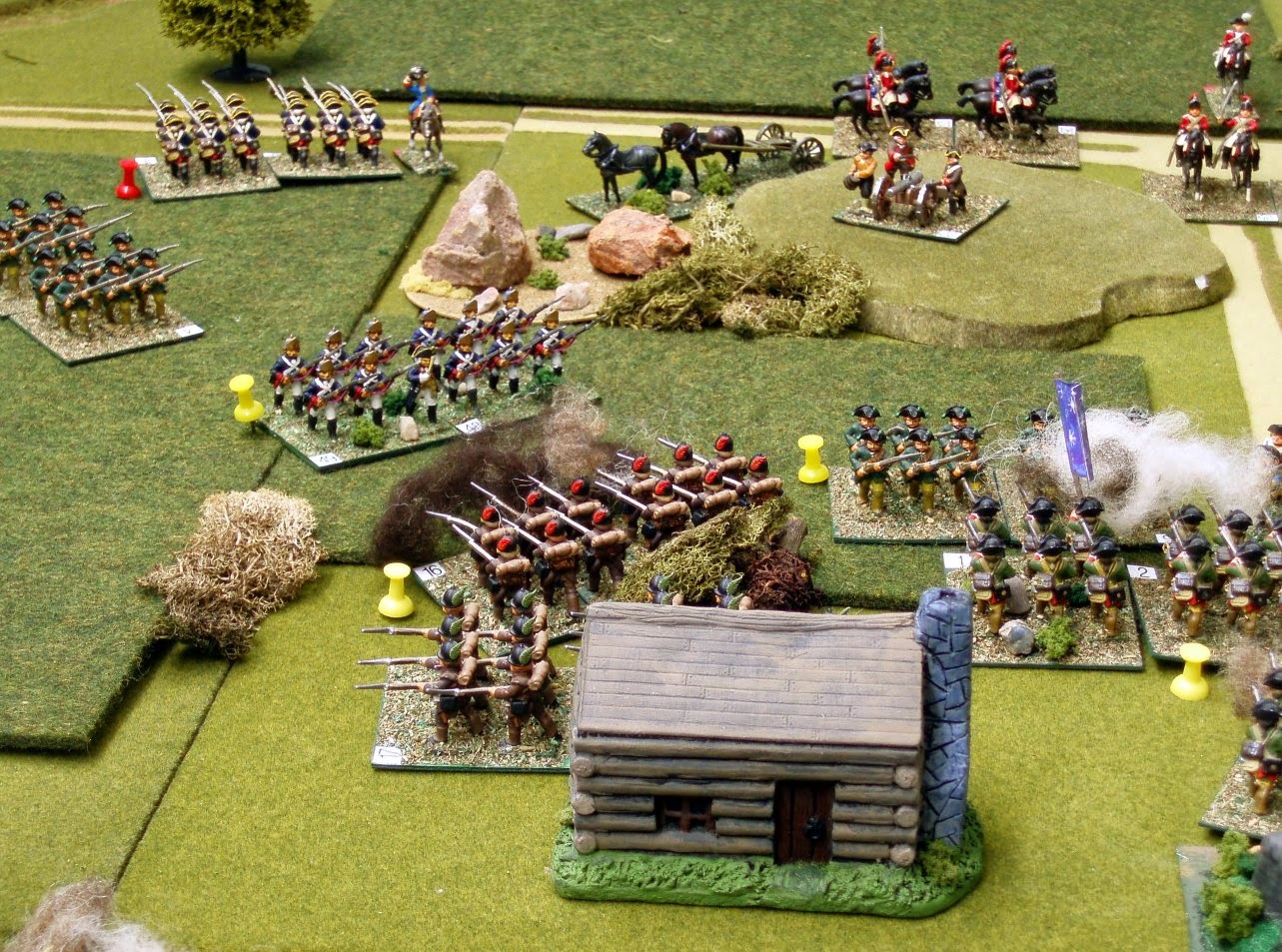 Following - same move American right flank - in WWII they would have called that a cab rank! 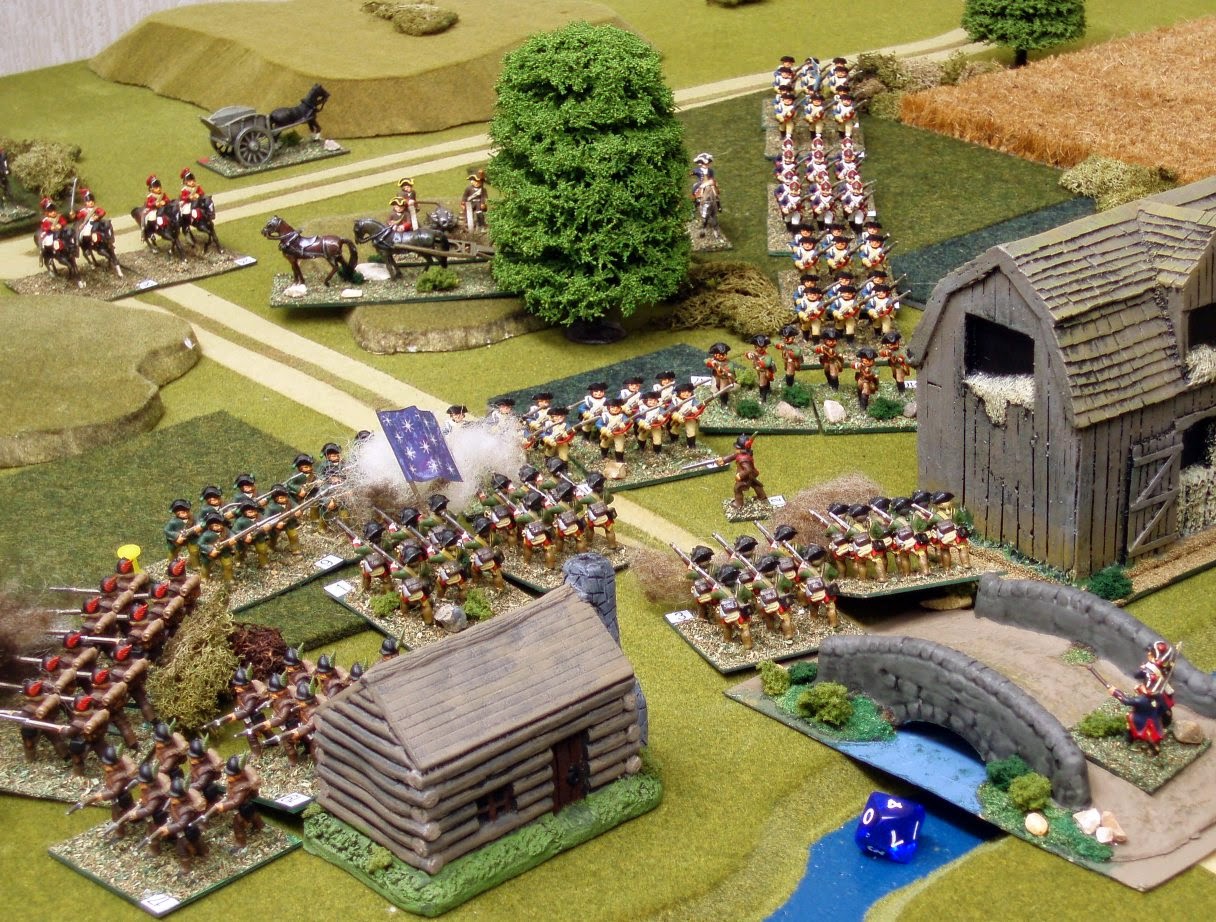 Next, two or three moves later and we are getting to the finale - just two strength points left but I am running out of troops and have had to throw in my reserve (the Militia on the bridge) - they didn't stand long, and neither did the Green Mountain Boys behind them, but they did gove the engineers long enough for another throw - we were down to one point remaining and the tension was ratcheting up! 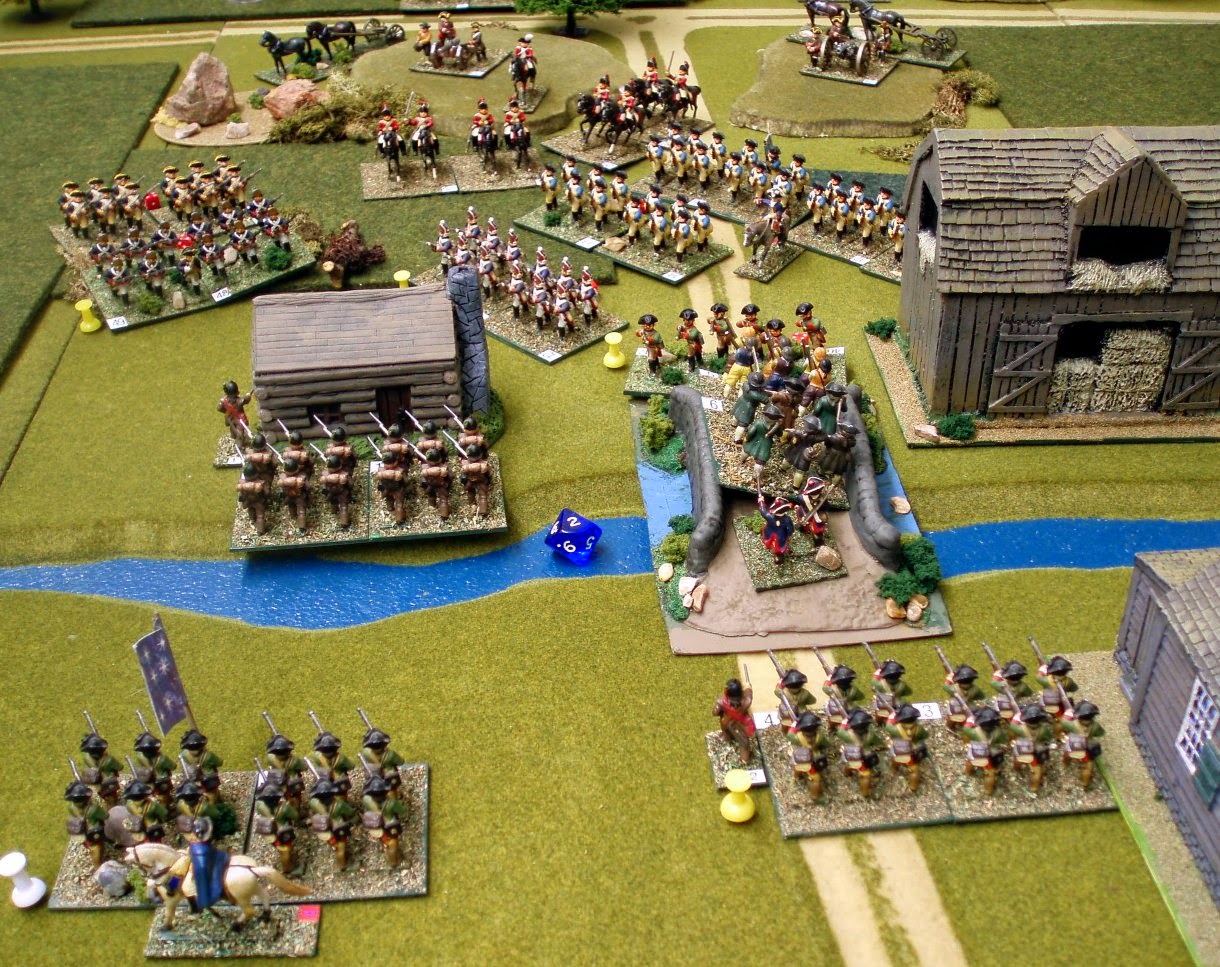 ...but it was not to be - the British cavalry saw off mine (geting their revenge for that first failure back at the beginning of the game) and with no troops left to change the outcome, and the engineers driven off, I conceded the game (following)...  well done DG! 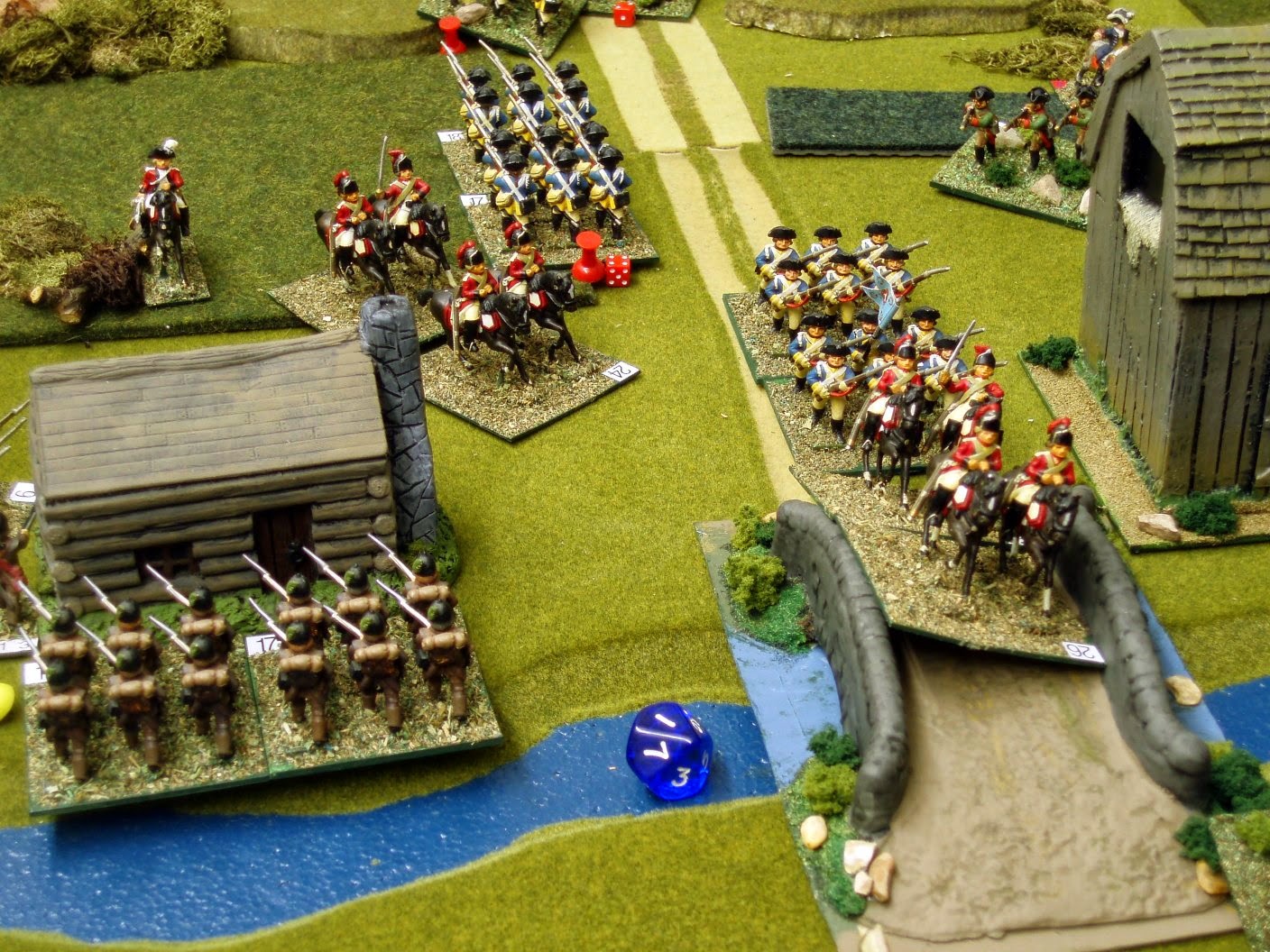 I like to think that Lofty C would have enjoyed that - it was a lot of fun and a huge lift to the spirits!

Posted by Steve-the-Wargamer at 11:59 am 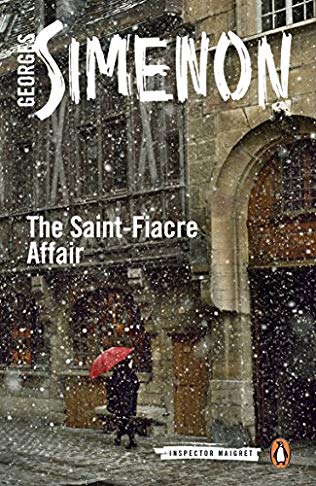 Looking forward to this.. 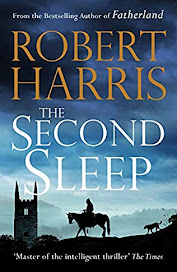 Have to say I was a little in two minds about this one, but Harris is a consummate story teller, and given I have enjoyed all of his books so far, it seemed foolish not to at least try this one. So we have the story of a priest who has been sent to a remote west country village to officiate over the funeral of their previous priest, and then becomes enmeshed in local events... it is difficult to review this without giving the fundamental and underlying plot away, the clue is in the book title (and that was a new theory to me) and the underlying idea is very clever if not a little freaky... fantastic book, clever plot/premise, fantastic characters, ended WAY too abruptly.. recommended.... 8/10